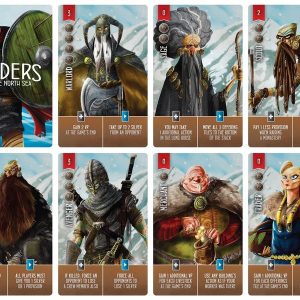 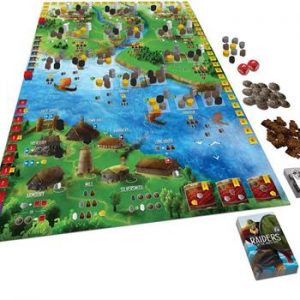 Raiders of the North Sea (EN)

Raiders of the North Sea is set in the central years of the Viking Age. As Viking warriors, players seek to impress the Chieftain by raiding unsuspecting settlements. To do so, players need to assemble a crew, collect provisions, and journey north to plunder gold, iron and livestock. Glory can be found in battle, even at the hands of the Valkyrie, so gather your warriors because it’s raiding season!

To impress the Chieftain, you need victory points (VPs), with those being acquired primarily by raiding settlements, taking plunder, and making offerings to the Chieftain. How you use your plunder is also vital to your success. Players take turns in clockwise order, and on a turn you place a worker and resolve its action, then pick up a different worker and resolve its action. Broadly speaking, those actions fall in one of two categories:

The game ends when only one fortress raid remains, all Valkyrie have been removed, or all offerings have been made, then players tally their scores.

“Raiders of the North Sea offers so much: great gameplay, amazing artwork, abundant strategy and tremendous components. All of this culminates in a game that I love” – Boardgamereview

“Despite having a theme that has become all too common in recent years, Raiders of the North Sea is absolutely terrific and one of the most unique worker placement games the genre has seen in some time.” – There will be games