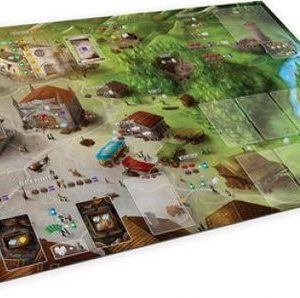 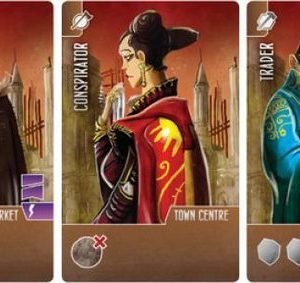 Architects of the West Kingdom:
Architects of the West Kingdom is set at the end of the Carolingian Empire, circa 850 AD. As royal architects, players compete to impress their King and maintain their noble status by constructing various landmarks throughout his newly appointed domain. Players need to collect raw materials, hire apprentices, and keep a watchful eye on their workforce. These are treacherous times, and rival architects will stop at nothing to slow your progress. Will you remain virtuous, or be found in the company of thieves and black marketeers?

The aim of Architects of the West Kingdom is to be the player with the most victory points (VP) at game’s end. Points are gained by constructing various buildings and advancing work on the Archbishop’s cathedral. Throughout the game, players need to make a lot of moral decisions. However, only at game’s end will their virtue be judged. A few underhanded deals here and there might not seem like much, but fall too far and you will be punished. The game ends once a set number of constructions have been completed.

Architects of the West Kingdom: Age of Artisan:
In Architects of the West Kingdom: Age of Artisans, journeymen have returned to the city as master craftsmen, equipped with knowledge of new crafts and tools. The Guildhall has never been so busy! While some apprentices spend time learning new skills, others adorn the city’s buildings with everything from golden tapestries, to stained glass windows. But don’t let the shimmer of lights and fancy wares deceive you. For not all that glitters is gold.

In addition to including components for an extra player, Architects of the West Kingdom: Age of Artisans adds the new Craft Cards, a dual-layered Guildhall Board, two new Player Boards and a variety of new Apprentices and Buildings.

Works of Wonder introduces an extension to the main board to hold the new Contribution/Consequence Cards, and keep track of players’ Influence. Players compete to construct the 5 Wonders, while gaining support from the new Princess and Profiteer tokens moving about the main board. Also included is an entirely new solo system with 6 unique opponents to compete against.

The West Kingdom Tomesaga:
Build the kingdom, defend its borders and increase your influence throughout the lands. In the campaign mode, players will be competing in an epic journey to collect the most tomes and earn their place among the chronicles of their people. Alternatively, players may instead band together to take on the ruthless Overlord in separate co-operative modes for each game in the West Kingdom Trilogy.

Boardgame Merchant Tip:
This expansion is a campaign expansion. The base games for the west kingdom games are required (Architects, Paladins and Viscounts). Even with only 1 or 2 of the games, players are still able to use the co-operative play modes and bonus content for those game. A Campaign expansion means that the games need to be played in order with this expansion. Players play Architects and they can reach certain goals in that game so they can get benefits for the next game (Paladins). Also players collect tomes and these tomes gives the player points for the whole campaign. Can you earn your place among the chronicles of the west kingdom?

“The mechanisms are great, the artwork is gorgeous to look at, and the game is a blast to play.” – Dude! Take Your Turn!

“As someone that usually can’t get into worker placement games, I enjoyed this one a lot, and that should say a lot by itself. “ – Sprites & Dice

“I highly recommend taking a closer look at Architects of the West Kingdom. “ – Table for One 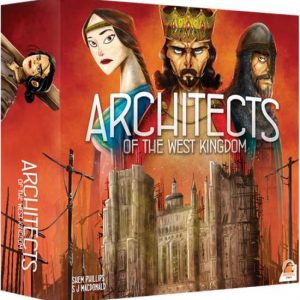 Architects of the West Kingdom (EN) 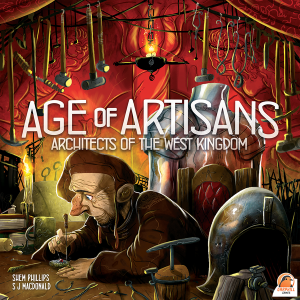 Architects of the West Kingdom: Age of Artisans (EN) Architects of the West Kingdom: Works of Wonder (EN) 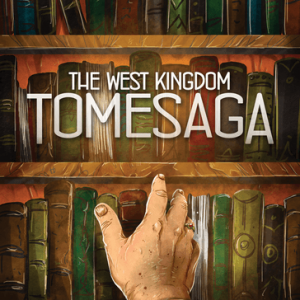